Aaron Paul and Asexual Representation; the story of a hug.

This is the story of when I met Aaron Paul and then called several friends to cry at with my happy-tears. It’s also the origin story of how a Netflix cartoon essentially changed my life.

I had to take some time to just enjoy the experience I had on September 6th, 2018 at the PaleyFest Fall TV Preview night in at the Paley Center. I am ready to share it now. I attended the fall preview for Atypical and BoJack Horsemen. Both are fantastic shows, though I have a special place in my heart for the latter.

Let’s set the scene. For years – like, decades – I have always felt like there was something off about me. I don’t mean mentally (although, jury is still out on that one, haha!). I mean socially. I have recently had a series of personal revelations that have literally changed everything. I’ll save the other details for another time. Let’s just get straight (no pun intended) to the point.

Todd Chavez is voiced by the one and only Aaron Paul. And I love him very much. Aaron Paul and his wife Lauren are my favorite IG ship.

Rather than describing Todd’s development I’m going to highly suggest that you do yourself a favor and watch BoJack Horsemen. It’s a fantastic, hilarious show all around! For those who aren’t familiar with Todd, I will say this to introduce him. He is an asexual person. And so am I. Feels good to say it out loud.

Todd’s journey of learning about asexuality and that he himself is asexual is an emotional roller-coaster for me. His awkward, self-loathing anxiety in response to his high school girlfriend Emily’s increasing interest in him. The dread he experienced when he came to understand what Emily wanted in a relationship… I was watching all this unfold with an overwhelming FLOOD of emotions.

I might be nothing. That was the moment it hit me. HARD.

I started crying so hard I had to pause the episode. I mean, my entire perception of myself was utterly changing right then and there. I had never seen anything that represented me. This was the FIRST time I had heard of asexuality and had it described in a way that made me realize… I am asexual. I’m not broken, awkward, afraid of intimacy, or any of the other things I secretly suffocated under for YEARS. I’m just asexual. And it was such a profound relief that I still feeling it.

As I continued watching the episode and rest of the seasons I began to understand myself even more. Gradually, I began to share this realization with other people. I finally had the language to express myself when people would ask me out. It decreased my anxiety (still working on the rest, haha) and eliminated the self-loathing.

Furthermore, I have realized that not knowing I am asexual for so long had held back my acting aspirations. In an entertainment world where ‘sex sells’ is a common motto it was really difficult for me to approach acting. I felt like I couldn’t authentically portray another character when I couldn’t even figure how myself. So many stories are driven by sexual tension and all the things I didn’t understand. It isn’t that I can’t “fake it” for acting purposes. Rather, it would stir up so much confusion and anxiety that I couldn’t focus on the story. Sadly, I stopped pursuing acting for a long time because of this. But not anymore!

Anywho. Jumping back to the night of the PaleyFest Fall Preview when we got to watch the first episode of BoJack Horsemen season 5! It was a great night and a great episode. But for me the most epic part happened after the Q&A panel.

I was very happy that the moderator brought up Todd’s asexual representation for the creator Raphael Bob-Waksberg and Aaron Paul to comment on. A lot of feelings were stirring in me. This show helped me realize something about myself that eliminated a source of DAILY anxiety and inner turmoil. Even freeing up the courage to start pursuing my dreams again. Their asexual representation literally changed how I experience day-to-day life. When the panel ended a small fraction of the audience headed to the stage to try to get photos and autographs. I stood to the side of the isle in a minute of indecision.

Of course, I wanted to go down to the stage and meet these people who had no idea how much they had helped me accept and understand myself, but I was also very nervous. It’s wasn’t about the celebrity status. I have met and befriended other celebrities. It was the moment of truth… Was I actually ready to say it out loud to veritable strangers (despite that I know them on an impersonal celebrity basis)?

Then I realized that it might mean something to them to know how much their show means to me. So, I descended the stairs at the right side of the stage. I’m not a pushy person, so I had already accepted that I wouldn’t get to see/talk to Aaron Paul. He was engaging fans and taking pictures with them on the other side of the stage. But Raphael Bob-Waksberg was right there. Maybe five feet away. I waited a moment while he was signing something for a fan and then I made my move. A took a breath and got his attention:

Raphael Bob-Waksberg thanked me and told me that it meant a lot to hear that. Then he told me to wait a minute. He crossed the stage, set his hand on Aaron Paul’s shoulder, and then led him back to me. He guided Aaron Paul to stand right in front of me and said, “Tell him what you just told me.” Then he graciously left me standing there staring up into Aaron Paul’s eyes.

After stuttering (possibly) unintelligibly about being sad that The Path (on Hulu) got cancelled I managed to get to the point. Now, I don’t usually loose it in front of strangers or celebrities, but Aaron Paul was standing there listening attentively to me explain how much I appreciate his work as Todd on BoJack Horsemen. He asked me at least three times to remind him what my name was so he would be sure to remember. Everyone around us were so respectful too. They waited quietly while Aaron Paul gave me his full attention.

I told him what it was like growing up and thinking that there was something wrong with me; never understanding why I always felts so different. He reciprocated with some bits of conversations that he had with a friend of his about asexuality. The best part is when he couldn’t stand watching stand there on my own all emotional. He just said quietly, “Hey, come here…” And opened his arms for me.

So, I hugged Aaron Paul and cried happy tears there for an extended a moment. Honestly, I’m crying again just thinking about it.

He hugged me for an sweet, respectful amount of time while I finished what I was saying. I stepped back and smile up at him and thanked him for taking the time to talk to me. I didn’t want to squelch the moment with asking for a photo or autograph. Seriously, the moment itself was more than I could have asked for and worth so much more than a selfie. Maybe another day if I’m lucky enough to cross paths with him in the future…

This isn’t even the end of the story!

I exited the auditorium and immediately called a friend to happy-cry over the phone to tell her everything that had just happened. “I met Todd!” After talking with her long enough to calm down I summoned a Lyft and rode home. I tried not to look like a crazy-person crying over a cartoon while I interacted with my chill driver.

Once I was home, I video messaged another friend to happy-cry to her and followed up with a mini-thread on Twitter sharing my experience and thanking Aaron Paul once again. Then I think I managed to (finally) get some food or something. When I came back to my phone… Not only had Aaron Paul taken the time to read and like all three tweets, but he took it a step further and SENT ME A DIRECT MESSAGE. His mini-paragraph to me was so touching and beautiful that it brought more tears to my eyes.

Hearts on my Thread! 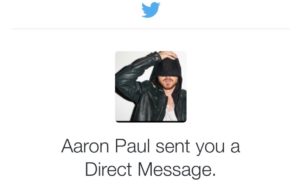 Haha, guys I was a happy mess that night.

I am keeping the contents of that DM to myself. It’s doesn’t feel right to screenshot that and share it. It’s too special to me to flaunt it (so to speak). Just know this: Aaron Paul is literally THE coolest, sweetest person probably ever. He’s, like, basically my BEST friend now. HAHA: 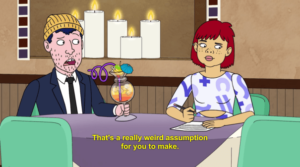 So, there you have it. The story of how a cartoon changed my EVERYTHING and how Aaron Paul deserves every single awesome thing ever. I have been inspired to start trying my hand, er voice… to get back into acting to start. That said…  BoJack Horsemen did so much for more, soooo if you ever need a goofy, asexual Minnesotan, Raphael Bob-Waksberg… Look no further. Haha! I’ve even returned to writing my own projects again. More on that another time! Generally, things are looking up!

As for now, thank you for taking the time to read! If you have any questions about asexuality you can @ me on Twitter here!

Here’s one more screenshot for the road… I think I actually DIED of laughter during this episode! 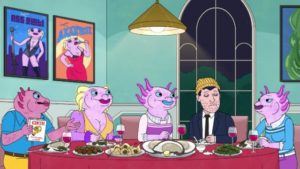