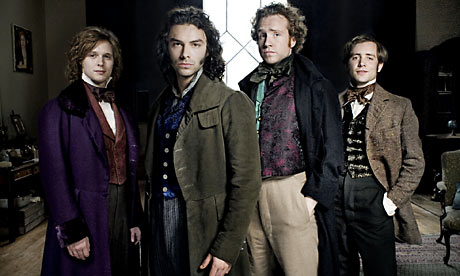 Image is property of BBC

[NOTE: It was suggested that I write my review of Desperate Romantics for each episode, rather than one covering the whole show. I like the idea, so that is what I shall do. The focus, of course, will be on Aidan Turner’s performance.]

Desperate Romantics follows a group of young artists. It’s the beginnings of the Pre-Raphaelite Brotherhood. Its title conjures an association with the show Desperate Housewives, which was a deliberate choice. Our narrator is the faithful, supportive Fred Walters. Then there’s John Millais, William Holman Hunt (aka Maniac), and Dante Gabriel Rossetti (the helmsman of the brotherhood). Aidan Turner plays Rossetti.

Okay, so that’s the gist of the  show. Let’s continue. Episode One is primarily about meeting the painters as they seek the perfect model to inspire their art. They also seek, in desperation, the attention and blessing of the respectable John Ruskin. Need, hunger, and inspiration are a constant for the characters, sometimes all at once, and occasionally not just pertaining to the art. Basically, what I’m getting at is, if you’re uncomfortable with scenes of a sexual nature…well, you’ve been warned. This isn’t American television.

One note regarding the latter: The sexuality in Desperate Romantics is not gratuitous as it tends to be in most films or (HBO) television shows. It has a natural quality devoid of pandering poises and the like. I say this because this style would agree with the Brotherhood’s artistic sensibility, so I like that the show itself supports it. (At least, such is my opinion).

Okay. So there’s that. But this blog is affiliated with The List and therefore I get to talk about Aidan Turner’s performance now.

Aidan Turner portrays Dante Rossetti with his usual intensity. No. Wait. Not the usual. Actually, his performance here can be more accurately described as a high voltage live-wire; sparking with bright, electric arcs of enthusiasm. The energy he puts into this performance could power the entire Republic of Ireland for a month (give or take a few hours). But if Turner’s Rossetti is a sparking a live-wire – exciting and beautiful – remember that live-wires are always, always dangerous and usually deadly. . .

Rossetti possesses such confidence and an enthralling, infectious love of art and beauty that it is easy to see how people are caught in his wake and drawn in. I think it’s fair to say that he is more talented with his persuasive (and deceptive) speech than he is with paint, in so far as this episode shows, at least. Yet he comes with undercutting, demeaning comments and shameless self-promotion. All part of the charm, right? Well, it’s this aspect of his nature that makes watching William “Maniac” Hunt headbutt him so amusingly satisfying, although Rossetti’s pained laughter certainly contributes to the comedy.

Rossetti’s introduction and infatuation with the beautiful model with “hair the color of molten lava” begins a new era to his art. He tells her, “I want to spend the rest of my life painting only you.” This model herself will become a key player, but that’s for later. The model being Lizzie Siddal played with a delicate boldness by the brilliant Amy Manson (familiar to fans of Being Human).

So, finishing touches for Episode One:

Desperate Romantics is as real and raw as the Brotherhood’s paintings.

Rossetti is the shiny glint of sunlight reflecting off a betrayer’s blade.

Theoretically, Aidan Turner could be an eco-friendly energy source…
The proof? His smile. It lights up his face anyway.

If I’ve amused you in the slightest, spread the fun by clicking one (or more!) of the social sharing buttons below!