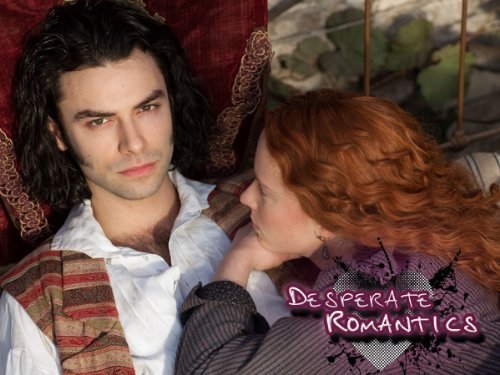 Episode Three of Desperate Romantics is full of deception and revelations. This is the episode when fiery Lizzie starts standing up for herself, challenging Dante more than he’s probably ever been challenged before. She calls him on his lies and his affection for her is genuine enough to want to change for her. Yet she is insightful enough to know that he hasn’t changed at all. So that train wreck we felt we were waiting for suddenly feels like it may be avoidable after all.

These reviews are meant to focus on Aidan Turner’s performance (as part of The List series) therefore I won’t go into much with the other characters. But I do want to say that this particular episode has a lot going on with each of them. I enjoyed this one very much. No, seriously. I love this episode.

So! Poor, jealous, and frustrated Rossetti is having a hard time actually progressing in his trade. Where, before he had insisted that he needed Lizzie as a model to be able to paint, now Lizzie’s modeling (for William Hunt) is the thing that pays for his painting supplies. Dante Rossetti somehow always finds people he can use, manipulate, deceive, and blatantly lie to in order to make money or connections (this time with Ruskin). Aidan Turner has such talent to still make Dante a likeable in the face of all the character’s many flaws. He lets vulnerability and frustration surface at all the right moments. His acting is as precise as it is evocative. In my humble opinion, Turner continues to impress.

Amy Manson and Aidan Turner have an attracting and fascinating chemistry as the relationship between their characters develop beyond the early stages of attraction into something stronger. This episode is when you start to believe that Lizzie Siddal may actually be the one woman able to tame the wild and crass-mouthed Dante Rossetti. And you start hoping that their relationship works. Seeing Sid and Dante sketching in opposite chairs creates the impression of two artistic equals enjoying their lifestyle together.

Yet Rossetti’s harsh and demeaning treatment of Fred (our faithful narrator) leave an uneasy edge of distrust; and rightfully so. Aidan Turner’s ability to deliver such harsh and at times crude dialogue with complete ease makes Dante all the more believable. You believe that he gets away with treating people who way because of the bold truthfulness in the way Aidan Turner personifies him. Rossetti belittles Fred by saying he’d be incapable of handling a relationship with Lizzie Siddal (in fact, saying she’d “destroy” him). When Turner performs this dialogue he is not cruel in the mannerism or inflections. He is simply stating this as an open, obvious truth. Actually, his tone is apologetic and pitying. And that is exactly what makes it so much crueler than any other reading of the line. Again, in my humble opinion, that is.

By the end of this episode I felt my willingness to cheer for Dante slipping. His manipulations and deceit have started to grow beyond my willingness to overlook. Granted, the motivations for his actions are clear and even sympathetic. He himself plainly states that everyone else is finding success much more easily and that he struggles under the pressure to try to keep up. Miss Siddal appears to be the only source of support and relief he has in all this; which is probably way he is so effected by her bold confrontations.

See? Aidan Turner plays Dante with such excellent command that though I intend to write about him I find myself writing about the character instead. Drat. Dante is even manipulating me now…

Frustrated, Wild Artist looks good on Aidan Turner. (Come on, someone was going to say it eventually).

Amy Manson’s Lizzie Siddal is an indomitable delicate terror, whom Dante may actually (really, truly) love. That is, if you could know what Dante really, truly felt. (Haha).

Dante is so manipulative that he even got to me, the biased reviewer. That cheeky little charmer…

Thanks for reading! If I have amused you in some small way, please use the buttons below and SHARE.