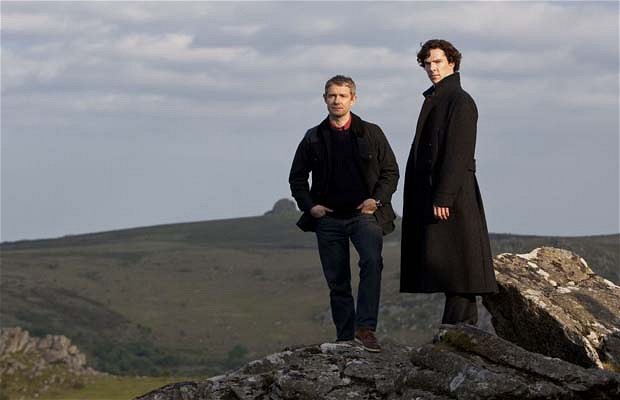 Holmes and Watson Out of London

Keeping with my series of posts, today I am writing about the Sherlock episode The Hounds of Baskerville. This is the gripping story that not only takes our leads out of London, but gives us a chance to see them wrestle complete terror when the sense of sight betrays them. This is also the episode that puts Sherlock Holmes in the position to realize John Watson is, in fact, his friend. This is a status he had never given a person before.

For this blog post I am feeling the particular inclination to choose specific moment with Sherlock and Watson to delve into. Rather than going over the episode as a whole, I think it would be more interesting to do, what I call, character vignettes. Also, be advised, content contains SPOILERS which may be unsuitable for those who have not watched the show/episode.

For those of you who have seen this episode I’m sure all I have to say is, “The Fireplace Scene,” and you’ll know what I’m talking about. But let me start by setting it up. In the previous scene, Sherlock has just seen a “gigantic hound” out on the moors. He had denied it,but he did see it. Still, he doesn’t believe it exists. His whole process has been shaken to the core and he is terrified. John Watson begins talking to him, trying to ignore Sherlock’s behavior. This is not to be insensitive, but is actually indicative that Watson has never seen Sherlock in this state and doesn’t quite know what to do with it.

Sherlock’s hands are shaking. He is blinking almost awkwardly being unused to the tears that come against his better reason. In a blazing, brilliant performance by Benedict Cumberbatch, Sherlock showcases that his mental capabilities have in no way been altered or damaged. His emotions begin running rampant in a way that is unlike anything we’ve seen before. Sure he’s been excitable, frustrated, and even dealing with nicotine withdrawals. But tears? Uncontrollable shaking hands?

This interesting effect this has on us, the audience, is we start to feel that fright as well. If Sherlock, of all characters, is that terrified, then what the hell is out there in the moors? But furthermore, we are suddenly more capable in understanding Sherlock Holmes. He’s more like us. Usually John Watson is the translator, the everyman who says, “No, explain it Sherlock!” when we can’t. Now, we see the human side of Sherlock in stark and terrifying detail.

Benedict Cumberbatch, well, it’s no secret that he is the quintessential Sherlock Holmes. And it always deeply impresses me when an actor can take an already complex role and add further layers. So, to say the absolute least: I am impressed!

The moment I chose to address specifically is when Watson was trapped in the lab in Baskerville. At first John is just doing his thing, investigating. He encounters several leaky pipes with steam filling the room. This is when I get to feel smart because I remember thinking, “But what could be in that steam?” Anyway. He enters the lab. The door locks behind him and suddenly a blinding light flashes on and deafening sounds echo about the room. He is instantly disoriented and flooded with adrenaline at the shock this has produced. Then the lights go off and the sounds are replaced by something else entirely.

Watson’s eyes are taking their time readjusting to the drastic lighting change. But now he hears sounds that begin to worry him. He sees a cage, presumably meant for a large animal, and the corner has been torn open. By the looks of it, it seems a large animal has forced its way out. Then the snarls are heard. Watson ends up locking himself in a cage for his own protection, on the threshold of completely losing it with fear. On the phone with Sherlock, John’s voice cracks and dips with terror as he begs for Sherlock to find him. Holmes appears only after John admits he has seen the hound.

This scene was riveting to watch with Martin Freeman’s performance seemingly having the effect of taking the air from the room. For me the best release of the tension he created came with his adrenaline powered defiant shout, “No it’s not!” Completely with a fist shaking in the air, it was a brilliant response to Sherlock’s calm, “It’s okay.” I burst with laughter every time and am thankful for it, every time.

I suppose today’s blog post is support the thesis statement: Benedict Cumberbatch and Martin Freeman are awesome, stunning performers (who I hope to work with someday). I would think it horrible, however, to end without saying the episode was exquisitely written by Mark Gatiss, who I would also love to work with someday. Goals!

I’m afraid this blog post isn’t as eloquently written as I would like, but I’m having one of those days when everything is getting away from me. Sadly that means I’m in a bit of a rush to get this posted. Next up: The Reichenbach Fall!