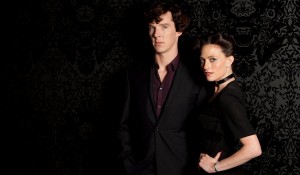 Sherlock and “The Woman”

(Image is property of the BBC).

I’m not intending on writing a review or a critique of the BBC’s program, Sherlock. In fact, I wouldn’t want to. Writing in such a manner always, to me, seems to come with an innate attitude that the writer feels superior to the subject, or completely objective enough to pick apart and pass judgment on whatever it is they write about.

Personally, I can say that I am far behind in my endeavors as a screenwriter to claim any sort of superiority, or even equality in the writing found in the BBC’s Sherlock. Nor can I claim that I am an objective viewer able to offer such a mindset in any critique. No; rather I am a loving viewer, a fan, who would prefer to use such affection to comment on a brilliant television program, one that supports quick wit and intelligence (things I highly value in entertainment).

Yet, being an English Literature degree holder, I cannot simply gush in some sort of “fangirl” craze about a show that, quite frankly, deserves it. This is also a study, my personal ongoing homework to hone the skills I will need to, one day, be able to accomplish something just as great. So, my thesis? The BBC’s television program, Sherlock, is highly intelligent and worth all the adoration it receives. Now I will support this statement.

Note: Keep in mind that A Scandal in Belgravia is the first episode of the second season (or series, as is the British term), so I’ll have to write my commentary on season one later. Season one is on Netflix. Season Two is on PBS(.org), temporarily. Please do watch them before reading this. From this statement the most reasonable deduction produces one single word, a warning: SPOILERS.

A Scandal in Belgravia is the Sherlock Holmes story that brings us the striking, beautiful Irene Adler; or, as Holmes would come to call her The Woman. Portrayed by the wonderfully talented Lara Pulver, Irene Adler is reinvented from the classic story to be as intense as she is powerful. In fact, the character makes her way in life as a high-profile “dominatrix.” Interestingly enough this is not a point or over indulgence in a hyper-sexualized manner as it could have been. On the contrary, The Woman and her profession represent the command of self-confidence – and the attraction to that confidence – more than it does the simple, base sexual attraction. That element is left, and rightly so, to the imagination.

While Irene Adler is the central figure, I cannot go without mentioning the opening resolution to last season’s cliffhanger; the stand-off with the terrifying nemesis, Moriarty. Without stating specifics about the scene, I mainly want to mention the outstanding performance by Andrew Scott. His sing-song and explosive speech mannerisms and flip-of-a-switch physical bursts of energy are completely fascinating and awe-inspiring. I found myself instantly enamored with his character at the culmination of season one’s episode, The Great Game. As one who endeavors in the acting arena I have found yet another fantastic performer on this show from whom to learn (by observation, as Sherlock Holmes would). Though I would love to go on further about Andrew Scott and his character Jim Moriarty, I will leave that for my blog covering The Reichenbach Fall.

I have written before about the conversation between Irene Adler and Sherlock when he demands, “Stop boring me and think. It’s the new sexy.” The show, Sherlock, really does encourage its viewer to think. In fact, I find it an interesting observation to say that it contains elements to show us it is possible to reach the capabilities of Sherlock Homles himself.

Yes; he’s a genius. Yes; he has eccentric personality traits that lend themselves seamlessly to the job of consulting detective. However, while Sherlock displays an extraordinary intellectual prowess it is not that he was born simply knowing all these things. Sherlock is constantly shown in the act of studying, in researching one thing or another. Thus the reason for random body parts being found in the refrigerator.

He mentions his website The Science of Deduction numerous times where he has written articles on various topics. These are relevant topics he’s been researching for a long while. He is single-mindedly committed to adding to this wealth of knowledge and has been doing so for a long, long time now. In short, Sherlock’s brilliance comes with two factors that, when combined, make him who he is; unceasing accumulation of knowledge/information and (the most powerful) the ability to use that information.

Having the knowledge is one thing, but knowing what to do with it is where the true genius lays. Not only is that an encouraging observation for me, the viewer, it is also the common factor among Sherlock Holmes, Mycroft Homles, Irene Adler, and – in a deeply unsettling way – Jim Moriarty. This is not to discount the roles John Watson, Molly Hooper, or DI Lestrade play.

In fact, the latter characters frequently give the spark of initial realization that leads Sherlock (more specifically) into the line of thought that produces the case breaking deductions. So even if you don’t feel so inclined to throw yourself mind, body, and soul into unyielding study and application of intelligence as the previously mention lot, you still have the encouragement to get involved and hone the skills you already have to play that just as important role of assistance (a term that is not to be treated as merely subsidiary here).

Have I supported my thesis enough? Of course, my sole citation is the episode itself. My belief is that watching it will be evidence enough that Sherlock: A Scandal in Belgravia is highly intelligent and worthy of endless adoration. Watch, if interested. If uninterested, watch anyway. Could be inspiring. With that, I will leave you to your deductions.