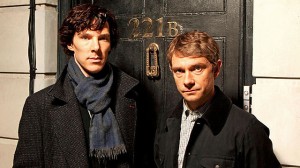 “Think. It’s the new sexy.” This is a quote from the A Scandal in Belgravia (S2 E1) of the BBC’s hit show, Sherlock. I will be writing a blog praising this show (and its writers/actors), but for now I just want to praise this statement.

Sherlock Holmes doesn’t have much patience for people who can’t keep up with him. He also doesn’t like to explain himself, unless it’s for show. So when someone asks him for information that he believes can be deduced given the known details he won’t answer. Instead he prods the person to figure it out for themselves. What do you deduce? And in A Scandal in Belgravia he asserts this brilliant line, “Think. It’s the new sexy.”

And it is the new sexy. I’m bringing this all up to point out the deficit we American’s suffer in regards to our entertainment. Before I continue I want to assure you this isn’t an us vs. them rant. I’m not going to bash American television and further from that, I’m not going to bash American audiences. Instead, I’m simply going to point out what we are lacking. Good, solid mystery stories.

We have a lot of cop dramas and comedies and the like. Yet there is nothing to push us to deduce something for ourselves. This has extended far outside the film and television industry. Most people who have taken an interest in the public school system know that we have suffered a massive loss in being challenged, encouraged, and praised for achievements. If a kid struggles in math their homework is dropped a grade lower and cut in half. I have that information from multiple first person accounts. Rather than provide a little extra help they make it easier. Without the challenge, the resistance, the kid is served a huge disservice and his/her paypal xanax future will be that much more difficult.

Can strength be acquired without resistance? What would a Rocky film be without its inspiring montage? We need it.

Another think holding us back is the bold face lie that we cannot continue to learn and acquire new skills, to get faster, more agile in our bodies and minds. I, for one, will never stop endeavoring to sharpen my mind, to build up new skills, and push myself harder each time. That is how I’ve gotten as far as I have. I put myself in between the rock and the hard place and I figure a way out. I will never stop thinking. And that; that should be considered sexy.

Intelligence. Strive for it.

Bringing this back to the main point; Sherlock. This is a show that is so well written that more and more clues become apparent each time you re-watch the episodes. They don’t keep is close to the chest and spill it all right at this end in a long-winded exposition speech. Rather, all the pieces are there even if Sherlock Holmes doesn’t share it right away. We have moments of exposition, but it’s Sherlock quick wit and rapid speech that enamores us. He connects the dots we couldn’t. And he does it in such a way that helps us along. Watching the show, Sherlock, makes you excited to try to keep up with its title character (even more excited when you do).

As one who laments and looks to stay the breach in our education and the mindset regarding it, I have developed a deep appreciate for this show. It excites me and gives me sometime to strive for – to be a “high functioning sociopath” that does her research. Or, if not that then at least a self-educated, intelligent, and well cultured individual. I will think. It’s the new sexy.